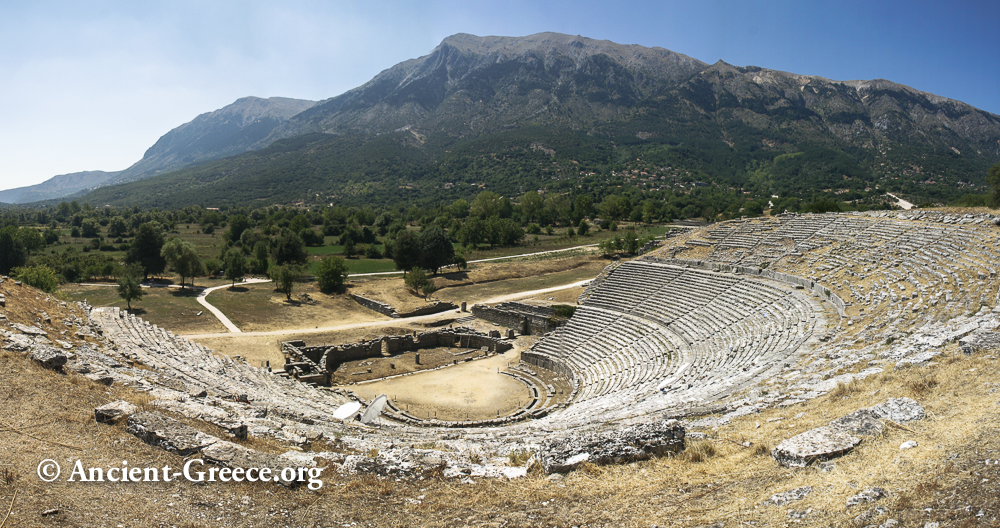 The Theatre at Dodona oracle.

Dodona is a very attractive archaeological site in Epiros, about 22 km southwest from Ioannina. For over a millennium and until the 4th century BCE the sanctuary of Zeus and Dione at Dodona was a renown oracle, second in fame only to Delphi and the host of the Naia festival which included athletic contests and theatrical performances.

The sanctuary gave prophecies to common every-day concerns that visitors submitted scratched on lead sheets. The priests then consulted Zeus and delivered his divinations by interpreting the rustling of the leaves of the sacred oak (the oak tree visible today was recently planted on the approximate site where the ancient one stood).

Although the oracle at Dodona was in use for over 1500 years, it reached it zenith after the 4th century BCE when a host of monumental buildings were erected and the Naia festival was founded.

Its most important ruins include the well preserved Hellenistic Theatre and the foundations of the Hiera Oikia that stood next to the sacred oak, as well as the traces of the ancient stadium. A plethora of metal artifacts were unearthed during excavations, the majority of which are exhibited at the Archaeological Museum of Ioannina.

Dodona is a pleasant archaeological site to visit, and an easy to get to if you are already in Epiros. Excavations are still ongoing, albeit the acropolis appears in a raw and unexplored state. Since 2014 the ancient theatre is undergoing further restoration with the goal of hosting an annual festival, similar to Epidaurus.