The Parthenon’s main function was to provide shelter for the monumental chryselephantine (made of gold and ivory) statue of Athena that was created by Pheidias and dedicated in 438 BCE. 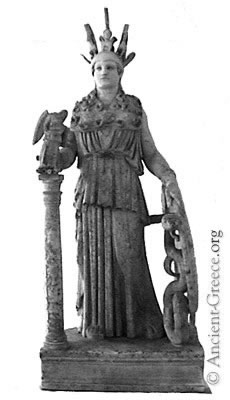 The statue stood approximately 9 or 11 meters (around 40 ft.) tall. It has not survived to our day, but we have enough accounts of its existence along with a number of smaller marble copies, including the one on exhibit at the National Museum of Athens.

Athena stands holding a Nike (Victory) on her right hand that extends forward from the elbow, as if offering Nike to the Athenian citizens. With her left hand she supports her shield which shelters a snake as it rests on the ground, and her lance that rests on her left shoulder.She is dressed with an Attica peplos, and on her head she wears a richly decorated helmet with a sphinx at the apex and two Pegasi on each side. Her breastplate is adorned with snakes and the head of Medusa at the center.

The statue was a hollow construction with a wooden armature that supported the outer surfaces of the golden drapery, and the ivory flesh of Athena. The statue was situated close to the south end of the cella and was surrounded by a procession of double-decked Doric columns on its flanks as well as the back. The floor of the cella in front of it was a shallow pool of water or oil, which added further drama to the statue’s context with its reflective surface.

More About
The Acropolis