The Bronze Age, a period that lasted roughly three thousand years, saw major advances in social, economic, and technological advances that made Greece the hub of activity in the Mediterranean. Historians have identified three distinct civilizations to identify the people of the time. These civilizations overlap in time and coincide with the major geographic regions of the Greece. The Cycladic civilization developed in the islands of the Aegean, and more specifically around the Cyclades, while the Minoans occupied the large island of Crete. At the same time, the civilization of the Greek mainland is classified as “Helladic”. The Mycenaean era describes Helladic civilization towards the end of 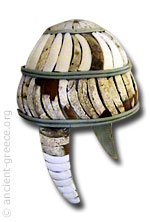 the 11th c. BCE and is also the called “Age of Heroes” because it is the source of the mythological heroes and epics like Hercules, the Iliad and the Odyssey.

All three civilizations of the Bronze Age had many characteristics in common, while at the same time were distinct in their culture and disposition. The Minoans are considered to be the first advanced civilization of Europe, while Mycenaean culture had a great deal of influence with its legends and Greek language on what later became the splendor of Classical Greece.

“The Mycenaeans are the first ‘Greeks’” (Martin, Ancient Greece 16).

Either by fortune or force, the Mycenaeans outlasted both the people of Cyclades and the Minoans, and by the end of the 10th c. BCE expanded their influence over the Greek mainland, the islands of the Aegean and Ionian seas, Crete, and the coast of Asia Minor. However, after 1100 BCE Mycenaean civilization ceased either through internal strife, or outside invasions (the Dorian invasions have been proposed as a possible explanation), or through a combination of the two, it is not known for sure.

What is known is that the extensive damage done to the Mycenaean civilization took three hundred years to reverse. We call this period “the Dark Ages” partly because the people of Greece fell into a period of basic sustenance with no significant evidence of cultural development, and partly because the incomplete historical record renders our own view of the era rather incomplete.

Next: The Dark Ages

Mycenaean Artifacts from the Athens Museum