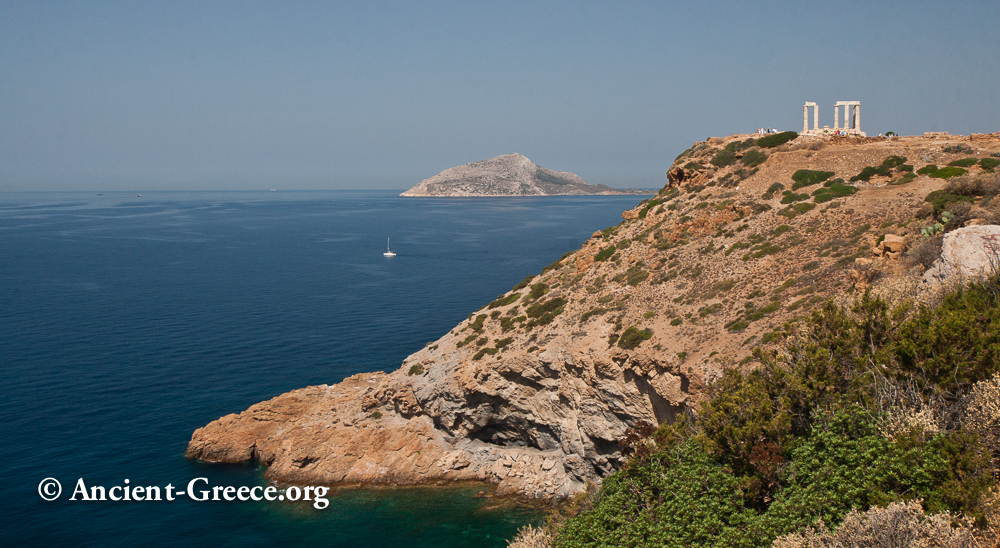 The Temple of Poseidon at Sounion.

Sounion (Σούνιον; modern Greek: Σούνιο) is the southernmost point of Attica to the east, about 40 miles from Athens. Because it commanded the seafaring lanes to and from Athens it was was fortified to guard the maritime interests of the Athenians. A strong garrison of Athenians hoplites and triremes was stationed at the promontory and guarded the all-important food supplies from Eubea and Pontos, as well as the nearby silver mines of Lavrion. Today, it is an archaeological site crowned by the elegant Doric Temple of Poseidon.

"Cape Sounion is part of the territory of ATTICA projecting from the mainland of Greece and facing the Aegean and the Cyclades. Sail round the cape and you come to the harbour; on the point of the cape is a TEMPLE OF ATHENE OF SOUNION."

This is how Pausanias opens his Guide to Greece and he might be excused for mistaking the temple of Poseidon as belonging to Athena--there is a temple of Athena nearby, and he visited Greece about 500 years after the building spree at Sounion when parts of the temples were farmed for other building projects. An inscription confirms that the temple belonged to Poseidon.

Touched by the sea on three sides the promontory is shrouded in legends. It was considered the place where Aegeus ended his life by leaping off the Sounion cliffs, distraught at the thought that his son Theseus was not successful in killing the Minotaur in Crete. In a tragic turn of events, typical of Greek mythology, Theseus was in fact victorious but his neglect to replace the black sail with a white one when he sailed home had grave consequences for his father. Aegeus' memory was immortalized by giving his name to the Aegean sea. In Odyssey, Homer describes Sounion as the "sacred" place where Phrontis died and buried: "Meanwhile Menelaus and I were on our way home from Troy, on good terms with one another. When we got to Sunium, which is the point of Athens, Apollo with his painless shafts killed Phrontis the steersman of Menelaus' ship (and never man knew better how to handle a vessel in rough weather) so that he died then and there with the helm in his hand, and Menelaus, though very anxious to press forward, had to wait in order to bury his comrade and give him his due funeral rites."

Sounion bay, just below the promontory toward the east was a safe harbor where a garison of Athenian triremes was stationed. The bay hosted regattas in honor of Poseidon since ancient times, and the Athenians dedicated one of the captured Phoenician war ships there after the battle of Salamis. Above it, to the southeast, the rocky promontory that rises abruptly from the sea was a well-known and a welcome sight for all sailors who approached the Saronic Gulf and gazed at the crowning Temple of Poseidon--the god who commanded the mood of the waters they sailed upon. Naturally, sailors and their families paid their respects at the site because a host of artifacts were unearthed during excavations such as Cycladic statuettes, Mycenaean seals, Archaic ceramic shards, and a number of Kouros statues.

The sacred area which included the temple, and the Athenian garrison were sheltered behind defensive walls with small towers built 66 feet apart. The fortification were constructed by the Athenians between 413-412 BCE, at the height of the Peloponnesian War when the Spartans with their allies were a constant threat to Attica, raiding both its surrounding land and interrupting its food supplies that came by sea. From the living area, a series of steps led to the sea where triremes were sheltered inside a double dock that was partially cut into the rock. The ship sheds were probably built in the 3d century BCE, and consisted of two roofed slipways, steeply rising out of the sea so triremes or other ships could be hoisted out of the water. Keeping triremes dry was of paramount importance because if their hauls were saturated with water they became heavy and slow.

Remnants of the ancient town are barely visible on the site. A wide street and few house foundations can be deciphered and show that the town was laid on an Hippodamian grid plan.

Access to the sacred site was through the Propylaea, which was a simple portico divided by two Doric columns with two flights of steps and a ramp. The portico was constructed at the same time as the temple. Immediately to the west of the propylaea were a banquet room, used for ritual feasts, and a two-aisle portico which was also built in the 5th century BCE partly by utilizing columns from the earlier Archaic temple of Poseidon. Two stoas framed the sacred perimeter's northwest corner.

The Macedonians reinforced and enlarged the fortifications and added shipsheds in the 3d century BCE. But their rise to dominance in Greece, and the shifting of the commercial and cultural centers toward the eastern Mediterranean ports after Alexander the Great's death, led to the eventual decline of Sounion.

Today, besides the Temple of Poseidon's extensive ruins very little remains from the other structures of the citadel. Scant foundations of the sanctuary's Propylaea and the defensive walls are scattered about the site and on the opposing hill to the north, the Sanctuary of Athena Sounias goes largely unnoticed by most visitors.

Next: The Temple of Poseidon

Temple of Poseidon at Sounion

Sanctuary of Athena at Sounion